COVID 19 NOTICE - We are here for you. Please call (337) 233-3366 to schedule a free consultation via phone, video teleconference, or email
Local Trial Attorneys
With National Acclaim
Contact Us Now For a Free Consultation
Home
Attorney Profiles
Keith P. Saltzman 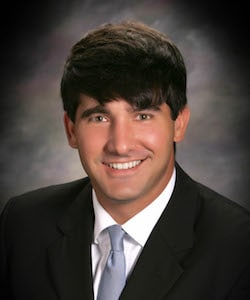 Keith P. Saltzman is involved in all types of personal injury and wrongful death litigation, with an emphasis on automobile, trucking, products liability, offshore/maritime, and industrial accidents. He also served as a curator with the 15th Judicial District Court, assisting with the juvenile section.

Mr. Saltzman was born in Lafayette, Louisiana and raised in nearby Gueydan, Louisiana. He is a fifth generation Vermilion Parish resident. Mr. Saltzman was a 1999 graduate of Notre Dame Catholic High School of Acadia Parish. He attended Louisiana State University in Baton Rouge, Louisiana, where he received a Bachelor of Science degree in Business Administration with a Concentration in Pre-Law in 2003. From there, he went on to receive his Juris Doctor and Bachelor of Civil Law degrees from the Louisiana State University Law Center in 2006.

After graduating from LSU Law School, Mr. Saltzman was admitted to the Louisiana Bar in 2006 and accepted a judicial clerkship with the Honorable Ralph Tureau in the 23rd Judicial District Court of Louisiana. Following his time with Judge Tureau, he joined Anderson Law Office (now Anderson Blanda & Saltzman) as an associate attorney in 2007.

Mr. Saltzman has received the following awards and recognitions for his accomplishments in the personal injury field:

Mr. Saltzman is an avid LSU sports fan. He resides in Lafayette with his wife, Erin Higginbotham Saltzman and is active in many adult athletics leagues in the area. In his free time, he also enjoys playing golf and hunting.