COVID 19 NOTICE - We are here for you. Please call (337) 233-3366 to schedule a free consultation via phone, video teleconference, or email
Local Trial Attorneys
With National Acclaim
Contact Us Now For a Free Consultation
Home
Personal Injury Law News
What Do You Do After a Car Accident?

What Do You Do After a Car Accident? 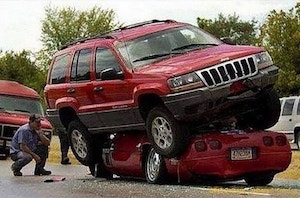 Suddenly, a truck blows through a stop sign and barrels into your car.

You’re surprised, then annoyed as you get out and realize your car is damaged. At first, you seem fine —your adrenaline is pumping now and you just want to exchange info with the driver at fault and get on with your day.

But after a few days that neck pain you tried to brush off just doesn’t go away. You miss some work. You see a doctor, and he tells you you’re going to need additional visits. Maybe you’ll need physical therapy and time off work to heal.

Therapy, Medical Payments and Lost Wages, on Top of Car Repairs? Now a Relatively Minor Accident is now Turning Your Life Upside Down

Of course, it’s easy to imagine a scenario where the accident really isn’t more than a fender-bender and both drivers walk away relatively unscathed. With a little more speed and driver inattention mixed in, however, it’s just as easy to imagine that same accident turning fatal.

But even middle-of-the-road accidents (forgive the pun) can have snowballing consequences, with unforeseen costs mounting and putting a real strain on your life.

And when the other driver’s insurance company says it’s only going to pay you a small fraction of what they owe, that you can “take it or leave it,” you will feel like you’ve been kicked while you’re down. At that point you might find yourself tempted to accept the offer, just to put the ordeal behind you and move on.

What Should You Do?

Emotions run high when a crash occurs, but how you react at the scene and in the weeks to come will go a long way toward securing a fair outcome in the end. So here are the steps to take when you’re in an accident:

Compliance with Louisiana’s “Move IT – If you can steer it, clear it!” safety requirement (LA RS 32:141.D) shall be in no way interpreted as a violation of the requirements to remain at the scene of the crash or evidence of fault. Law enforcement and insurance company personnel are well trained to analyze physical evidence, witness accounts, and crash dynamics to determine the cause of the crash and the at fault driver , alleviating the public’s concern of moving crashed vehicles prematurely. --- Louisiana State Police statement

Let’s forget that hypothetical accident for now and look at how insurance companies stay profitable. They contest frivolous claims, of course, as they should do. But as we’ve seen time and again, they also try to save money by delaying and denying legitimate claims. They may say you aren’t “really” injured, or they may defend their low-ball offer in courtroom battles that never seem to end.

The “three D’s” make up the mantra of these commercial insurance companies: “Deny. Delay. Defend.”

Why You Should Stand Up for Yourself

By the time 2017 comes to an end, a ccident victims in Louisiana will have walked away from millions of dollars they were rightfully owed this year. They will do it because they just want to get on with their lives and put the entire unpleasant experience behind them.

One former claims adjuster for Allstate told CNN she would offer as little as $50 dollars in some cases. Some accident victims thought if they didn't accept her offer, they'd get nothing at all. Imagine someone who has been injured, who has missed work, who has gone back and forth with police and insurance companies and doctors over the course of many months. It’s not a stretch to picture them accepting such an absurd offer, fearing that they might not get anything at all if they don’t.

Yes, getting justice in a court of law might take longer than an initial lowball offer. Hang in there. Even if your case doesn’t go before a jury, Anderson Blanda & Saltzman can stand up to the insurance companies on your behalf.